Sew it yourself! The Bimini Skin Kit for 4-Bow Frame provides all the materials you need to sew the fabric top for a bimini. A bimini top is a great way to provide protection from the sun and shelter from the rain and spray. Our bimini skin kits are perfect for replacing the fabric top on an existing bimini frame or can be paired with one of Sailrite’s Bimini Frame Kits (sold separately) to build a new bimini from start to finish. This bimini skin kit contains all the supplies required to sew a bimini top from the Sunbrella Marine Grade fabric in the standard color of your choice to patterning material and zippers.

The Sailrite 4-Bow Bimini Skin Kit features zippered tubing sleeves for easy removal and storage. Tails at the forward and aft edges act as attachment points and to prevent water from wicking back under the cover. Facing along the sides keep the cover from stretching and webbing straps offer additional support to the bimini. Add window material or extra zippers to this kit to make optional curtains, bridge panel attachments, backstay slits, or windows.

This bimini kit will fit on a frame with a maximum width of 106 inches and a maximum fore & aft spread of 126 inches.

A sewing machine, scissors and basic hand tools are needed for construction of this kit. Bimini Skin Kits do not include frames, fittings or strap eyes. Bimini frame kits are sold separately. 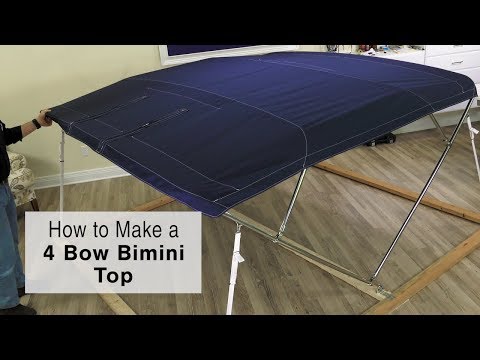 How to Make a 4 Bow Bimini Top

We Made Our Own Bimini!

We just put the bimini on our 37' sailboat and could not be more pleased. We ordered the kit and followed the video carefully, and it looks great and fits perfectly. We watched the videos rather than the written instructions – they were mostly the same with some small differences. The video was wonderful – well paced and easy to follow (the narration was so soothing). We had access to a local maker space where we were able to use heavy duty machines, which was essential. I couldn't have done it on my regular home machine. We didn't purchase the hot knife and instead used a soldering iron, which took forever. It increases the cost significantly, but if you plan to do any other canvas sewing for a boat it's probably worth it to buy the hot knife. One thing I wish I had known, and would have if I'd watched the whole video first, is that you can customize the order to have the thread match the fabric color. We have white, which looks fine, but would probably have chosen the color to match the fabric if we'd known we could.Another thing to note, as the other reviewer did, is that we did not have enough basting tape to finish our project and had to buy more from a craft store. (I think we were about 15 yards short). Thanks Sailrite, we feel so accomplished!

While the video in this listing is somewhat different that the included instructions, it is, never the less, very helpful. The suggestion to build a wood frame to mount the stainless steel bimini frame on and do the work indoors is very worthwhile. This is much better that trying to work out on the boat. The kit has everything you need to build a great bimini top, with one exception. The roll if basting tape provided is only 60 yds. If you follow all the basting recommendations in the video, you will need about 80 yds. One other problem I had was in measuring to install the zipper pockets for the primary and secondary bows. The pockets were made by measuring 6" perpendicular to the curved seam edge. When sewing to the forward or aft panel, the instructions require measurement parallel to the skirt edge. This results in an extreme excess of pocket material at the bimini corners. It's better to use the perpendicular method. All in all, this kit results in a very well made and durable bimini top that fits well and looks great. And, you will save quite a bit of money by doing it yourself.

Thanks for the great review! I wanted to mention that the fullness of the pockets at the corners for the primary and secondary bows is intentional. This is why we measure parallel to the skirt edge. It won't cause a problem to do it as you suggest but you might find the edges are overly tight about an inch or two above the skirt. This is less noticeable on 3 or 4 bow frames but very obvious on 2 bow setups. Again, thanks for the review and we will look into the basting tape amount included.