Lazy jacks are a method of containing a mainsail when it's lowered. The Harken® Lazy Jack Kit uses a set of lines on either side of the main which are attached high up on the mast and down to the boom. The main can be dropped without falling on the deck as the Harken Lazy Jack lines capture or cradle the mainsail as it drops. Lazy Jacks will not flake the sail, but it will hold the sail on the boom.

The Harken Lazy Jack system is much cheaper than a Dutchman system with no modification of the sail required (although full battens work better than standard battens). The Harken Lazy Jack hardware is attached to the mast and boom with stainless steel pop rivets or ss screws (included in kit). The installation process is relatively cheap and easy.

Harken Lazy Jacks are designed to contain and restrain the mainsail while reefing and furling. Can be quickly detached from the boom to permit the use of a sailcover with slots. Strong enough to be used as a topping lift for boats with extreme roached mainsails. Kit includes all hardware, rope, fasteners and installation directions. 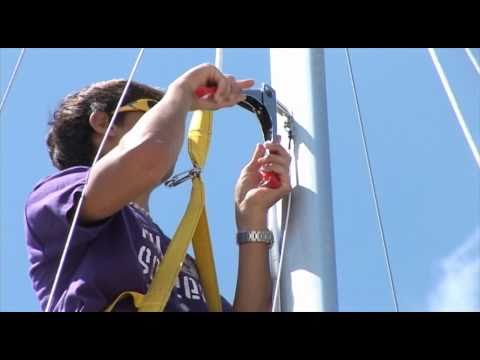