Please Note: The manufacturer lists the size of the sheet as 29" x 68", however, we have found that the sheet size varies up to 3 inches in both length and width.

Baste window material in place with Seamstick over the fabric. Sew the window in place using a #18 or #20 needle and V-69 or V-92 thread. After sewing, use scissors to trim away the fabric from the window. Bind the raw edges with binding for a more finished appearance.

Pro Tip: Due to a slight bluish tint, we recommend pairing this product with other Regalite or O'Sea products. 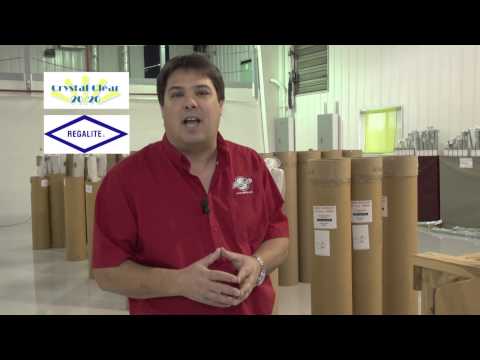 Clear and easy to sew

Used this to replace a window that was torn. It worked out perfectly

Easy to work with and great size/cost for certain window needs.

Replaced windows on a side by side jd . Very happy with this product.

I always use this for replacing dodger windows, easy to work with and lasts for years. Thanks Sailrite!

Great product - very clear. Made a big difference on the dodger

I was replacing my dodger windows and this fabric worked great. I used 40 gauge last time but I like to sail with my dodger lowered to deck for improved visibility and the 40 gauge is too stiff to fold down easily. This material is a perfect compromise for me. Thick enough for strength and longevity but flexible enough to fold easily. Now if I could only learn how not to scratch it while sewing it.

We purchased our Catalina 34 16 months ago and knew that we would have to replace the Dodger wing 'windows' but I had not completed any significant sewing project. After spending a fair amount of time researching on the vinyl material to use, I selected Regalite on the Sailrite website. The online projects showed how to replace an existing window, but the example shown on line was a slightly different construction to ours. But after watching the how to video multiple times, I was pretty confident that I could do this. I ordered two of the 29" x 68" Clear panels and some other materials from the Sailrite website, they arrived in just a few days. The panels came in two rolls, each packed inside a poly tube and those packed inside a substantial cardboard outer box. Just seeing the clarity of the product raised my eagerness to complete the project, so I removed the dodger wings and brought them home. Lubed my Sailrite LZ1 sewing machine and then started to follow the project instructions. The panels are supplied with a paper sheet on the roll to stop the surfaces sticking etc, I used that paper as a base on which to lay the panels while sewing, that helped prevent scratching the panels on my work table. After completing the project, I showed the results to my wife, she was impressed. And they really do look great. In the past I have done a few small projects, making a riding sail from the Sailrite kit was the most extensive, but the dodger wing windows was far more daunting. I decided upon the Regalite simply because I'm probably going to replace the entire dodger next year and that will involve a redesign. The Regalite was comparatively inexpensive compared to the more robust materials, but I'm expecting that they will last several years. Great project, great product and great advice from my online chat with the Sailrite folks. Thanks. Paul