The Sailrite® SnapRite® System Complete Kit is a unique new snap fastener system created by Matt Grant (Sailrite owner). The SnapRite System features a set of four dies that work with a standard rivet gun to install button, socket, stud and eyelet snap fastener components with more ease, speed and precision than ever before. This Complete Kit comes with all the tools you need (except snap fasteners) to start installing snaps.

The color-coded dies work in pairs to install snap components on site for accurate positioning. The key to this system is the use of a SnapRite Mandrel and using snap components that have a hole down the center. The SnapRite System requires the use of SnapRite Buttons and gypsy studs but installs all other standard snap components in a ligne 24 size (most common size).

The SnapRite Dies work with any standard rivet gun, so buying a new rivet tool is unnecessary if you already have one. Dies screw into the rivet gun’s nosepiece and must be used with a SnapRite Mandrel (included). Position fasteners, punch the mandrel through the fabric assembly and rivet the fasteners in place.

SnapRite System Complete Kit includes a Professional Heavy Duty Rivet Tool. Made from cast aluminum, this rivet tool is lightweight and works great with the SnapRite Dies. All components come in a foam lined carrying case for convenient storage. 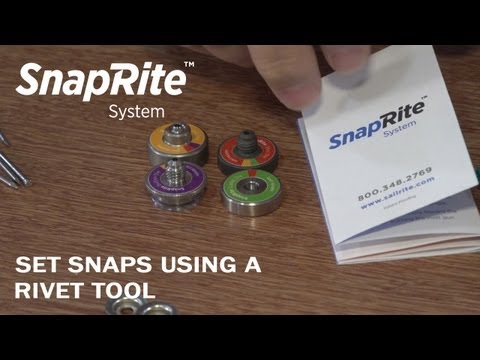 Matt Grant explains the many benefits to using SnapRite System to set snaps. 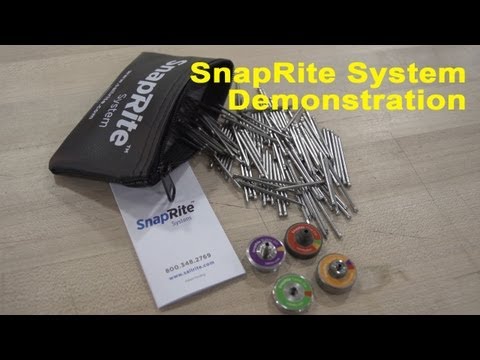 Matt Grant shows a Sailrite employee how to use the SnapRite System to install a tool bag onto a work bench.

great product, easy to use. quality.

great product, easy to use. quality.

This makes positioning snaps extremely easy. Not cheap, but well worth every penny. I've used it on a flooring project and plan to use it on many others.

I just received the SnapRite System Deluxe Package that will be used for the construction on new curtains on my Oday 322. Nice package.

I like this system so much I just purchased a second one to leave on our Catalina 445. I sew canvas for friends at home (90 miles from the boat) and have often wanted/needed another system on the boat only to have it at home. The system is easier on my hands to squeeze than the big bulky silver press I used to use. It is also accurate in placement of snaps.

High quality system - easy to use.

The snap kit is expensive but worth every penny! I have spent to many years buying the cheap systems. I should have bought this one to begin with.

It's a learning process

I'm not particularly a fan of snaps and all things hardware. However I had some "scrap" material left over from another project and decided to make a new companion way cover with a vinyl window. The old one was tired and I live in the Pacific Northwest 15 miles from Canada so light and warmth are on the top of my list. With the help of Sailrite's fabulous video and modifying the pattern from my old cover I embarked on what should have been a simple project. All was basically well until it came to the part where the snaps are installed. I followed the directions diligently, stopping the video every 3 seconds it seemed like to make sure I had the right dies and order of things in the assembly process. I did ok with the part that attaches to the cover itself, (although I broke the mandrel) and was able to attach it with only two "squeezes" on the riveter. I cannot however for the life of me get the button to attach. Convinced I must have somehow broken the riveter in the process of installing the snap I asked a friend who is well versed in these things if I had, in fact, done just that. After "squeezing" 4 or 5 times I still could not get it to lock into place. He took a careful look at the riveter, the snap and button and informed that I had made some headway but simply needed to press harder and persevere. Being someone who puts things down for a bit when I become frustrated I have yet to get back to it but I am confident that with this magnificent tool/system and sailrite's fabulous video I will not only get the button on but all the snaps around the edges as well. Thank you sailrite for the opportunity to learn new things and the explicit directions and visuals to figure it out. My next project is the sail cover with lazy jack slits. Happy Sailing.

I have never used snaps on a build before (we are a small custom furniture shop). This system sounded about as easy to use as a pop rivet gun and it was. The first set was on a test piece and I wasted three snaps, as they turned out perfect the first time. It is very helpful to be able to use the mandrel as a guide through all the pieces. The dies are all color coded as to which ones work together (look for the small stripes on each die). I was a bit surprised at the brevity of the instructions, but it really is that obvious. Now I'm looking for excuses to use more snaps.

Received my purchase super quick, nicely packaged, snd even got a case to put it in.

Best snap system I have ever tried, Snaps are tight and look like they were done by a pro