Tenara® Lifetime Guaranteed Thread features unique fluoropolymer fiber construction that extends the life of fabric seams and ultimately the products in which it is used. GORE® Tenara has high strength and durability that for over 10 years has been proven to be unaffected by exposure to UV rays, cleaning agents, pollution, saltwater, air, rain and snow.

Great for outdoor, awning and marine applications, Tenara thread will not rot if left outside all year round. It remains colorfast even in extreme temperatures and frost. Although more expensive, Tenara is a greater value than other polyester threads when considering life span and re-stitching costs. Choose Tenara thread to improve the performance of outdoor fabrics where seam life and integrity are of the utmost importance.

Tenara M1000 is similar in weight to V-92. Use a smaller than normal needle (#16 or #14 for mesh fabric and #18 or #20 for dense fabric) to hold the thread in a proper loop and to create smaller holes that prevent fabric leakage. Tenara sews very well and does not require as much upper tension as normal polyester thread.

We recommend using Tenara thread with rotary hook sewing machines like the Sailrite® Fabricator®, 111, Professional and Big-N-Tall. Not sure if your machine has a rotary hook? Learn more in our Rotary vs. Oscillating Hook Sewing Machines article.

FOR INDUSTRIAL USE ONLY. Not for use in food, drug, cosmetic or medical device manufacturing, processing or packaging operations.

Why Use Tenara Thread? (PDF) 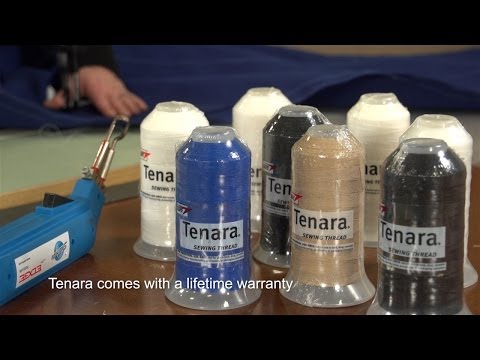 Timely delivery. All parts were there.

Great thread we love to sew with the black but for some reason we feel as though the white does not sew as good.

Excellent thread but some caution with upper thread and glue

I like this thread. I have sewn a number of boat exterior projects successfully. Mostly Sunbrella. I have found some differences from conventional thread, though: 1) I have found that sewing with this thread through seamstick is practically impossible. You can use seamstick, but stitch just adjacent to it, not through it. Presumably the glue drags on the thread too much causing snags, skipped stitches and broken thread. My seamstick is a bit old, so perhaps it is too gluey. 2) Sewing the hook part of Velcro also causes difficulties. I can sew the loop part, but switch the upper thread to conventional thread for the hook part.

Not a bad product, the thread seems to break off very easily.